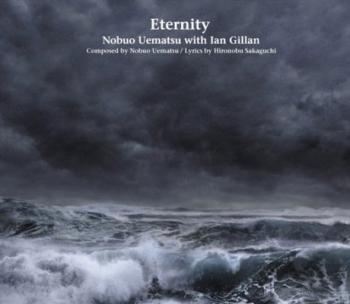 3 years ago, if someone came up to me and said "Hey, I bet you Ian Gillan and Nobuo Uematsu will work together in the near future," I would have voice belted that crazy person outta here. "Insanity is contagious," I would think. "Better resume my Calculus studies!" Yes, it seems fate is not without a sense of irony.

Heck, if someone came up to me and said Uematsu would quit Square Enix, and that Sakaguchi would also quit Square Enix, form his own studio, and develop games for Microsoft's console, I would have just backed away slowly from whoever told me that and hope we never cross paths again. Years ago this seemed like such a weird concept that it was nigh unimaginable.

But here we are in 2007. Blue Dragon has been released for the Xbox 360 with a soundtrack composed by Uematsu, on which Ian Gillan appears. I say we stop dillydallying and see how Mr. Gillan has fared in his first VGM song, entitled "Eternity."

The first track, entitled simply "Eternity," is highly addictive. It didn't take long for me not to be able to stop listening to it. That usually happens when the composition is either a train wreck (you have to look away, but you just can't) or sheer brilliance. Actually, scratch that last sentence. There's no way I'd listen to train wrecks like Final Fantasy X-2's "Chocobo" several times, so Blue Dragon's song must be awesome.

Well, with lyrics written by Hironobu Sakaguchi himself and translated by a certain Alexander O. Smith, famous for his localization of games such as Vagrant Story and Final Fantasy XII, there was no way Ian Gillan would have something bad to sing. And, in fact, he doesn't. Sure, it's got one hundred percent cheese factor, but that's what makes the song so fun to listen to! I mean, "A light shining on my heart / Memory of forgotten love / Rays burning through the clouds / Down from the sky up above," come on. It's not meant to be deep, it's not meant to make you reflect on the meaning of life and death or ponder about what it means to be human; it's for you to have some fun.

Music-wise, Henmi's arrangement is pretty groovy. It's meant to be played by a rock ensemble with two guitars, bass, keyboard and drums. So if you're used to Uematsu's little love ballads (aren't we all, for better or for worse?), this comes as quite a shock. And it was about time, too. Some Final Fantasy games could have greatly benefited from a rock theme song instead of melodramatic J-Pop. Henmi isn't a total stranger to the Square Enix world: he worked on White Melodies of Final Fantasy Advance, arranging "Mewt (Acoustic guitar version)," "Unhideable Anxiety (Electric guitar version)" and "The Place We Should Return To (Invincible version)." Since all three of those arrangements are for some sort of guitar ensemble, it's not hard to say why the arrangement of "Eternity" is so friggin' cool.

Ian Gillan's performance ain't too shabby either. He displays his amazing vocal range by screaming and wailing in ridiculously high registers, with apparent ease. That's voice belting for ya, right there. On occasion, I can almost picture the face Ian's making when singing, because his voice seems to change enough that sounds like he is singing with this teeth firmly in place, simply moving his lips. Of course, you could argue that he was given directions to do that or something, you never know. However, I, for one, enjoyed the song quite a lot.

But if rock 'n roll is your bag, baby, then there's a good chance you won't be very fond of the second track of the single, "Eternity ~Hiroki Esashika Remix~." Esashika arranges Henmi's rock into techno, and does so adapting his beats and samples to Gillan's voice, so it's always the focus of attention when it's there. The end product is actually quite good. Initially, the idea of turning that fine rock song into some dance music for peasants irked my elite musical sense, but then I listened to it some more and it grew on me considerably. There is still some guitar and some semblant of drums, so there is still some rocking, just kind of downplayed because of the techno. "Downplayed" is a bit strong, but the beats certainly are more important, and more prominent.

It is expected that Esashika knew what he was doing, seeing as he is a very famous techno artist and DJ in Japan. It makes financial sense to have called him too: having such a big name on a single might draw attention to the game. I'm not a techno fan, but I enjoyed it quite a bit. While the techno version of "Eternity" is a fine addition to the single, I found the original rock version to be more enjoyable nonetheless. I guess Ian's voice lends itself better to the guitars than to the beats.

Last but not least, there is the Ian-less version of the rock arrangement of "Eternity." Now you can hear the Henmi goodness without that ever obtrusive singing! It should, however, have been called "Eternity ~ vocal chord breaker" because there are what, three people in the whole world who can sing in pitches as high as Ian, and one of them is his own second personality, Ilan. Neither knows the other one exists, it's pretty wild. I would not be opposed to hearing that version in the game, to be completely honest. It's an awesome rock arrangement that works well without words (perhaps it's even better in their absence!), and it still be fantastic as a boss battle theme. Had I been in charge of that aspect of the game, I would have the "Vocal Chords Breaker" version play at regular, unimportant boss battles, and the Gillan version in major boss battles. Obviously, for the last boss, I personally would sing it, and later show it off as the pièce de résistance of my vocal career.

After reading the report of some disappointed fans, I thought I was in for a ride of the old hype train, which, unfortunately, was to be derailed. Maybe my lack of knowledge of Ian's singing career helped me to enjoy "Eternity." I know, let's see, "Smoke in the Water." And just the opening riff, none of the sung parts. I just realized that mayhap someone with a better grasp of Deep Purple should have reviewed Ian's singing instead of yours truly. But that's what reviewing is: you live and you learn. And you live. And you search for stuff on Google.

Eternity - Nobuo Uematsu with Ian Gillan is one heck of a single. It's one of those partnerships so unbelievable that you just have to listen to so you can say later that you didn't miss the experience. Wait, that makes the album sound like a bad thing. It most certainly is not. It's pure, unadulterated, uncut, unrated fun. You don't listen to be moved by it, you listen to chill out, to play some air guitar or any other assortment of air instruments of your choosing.

And there's even a techno rendition to appease even the cheapest of fans who won't even shell out a couple of bucks for an awesome song. Hiroki Esashika remixes Satoshi Henmi's arrangement of Nobuo Uematsu's original composition and ends up creating a dance tune that makes me want to move my body like there's no tomorrow.

And so, after that, I hear a worldwide "Ew."

Composed & Produced by
Nobuo Uematsu (SMILE PLEASE)
Lyrics by Hironobu Sakaguchi
Arranged by Satoshi Henmi
Translation: Alexander O. Smith
Album was composed by Нобуо Уэмацу and was released on November 22, 2006. Soundtrack consists of 3 tracks tracks with duration over about 15 minutes. Album was released by Aniplex.