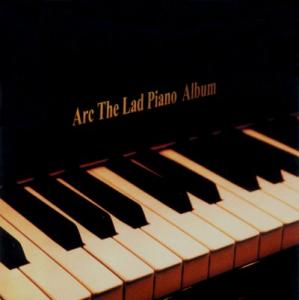 In 2000, a piano arranged album was produced to celebrate the initial trilogy of Arc the Lad scores. Keiichi Oku, an experienced anime composer and pop arranger, was once again hired for the series to handle the arrangements. The piano collection stands up resultant piano collection stands up respectably alongside others from the Final Fantasy series and beyond, despite being inspired more by popular music than classical composers.

In series' tradition, the Arc the Lad Piano Album opens with a rendition of the main theme. Following a somewhat elaborate romantic introduction, the arrangement soon jumps to a straightforward rendition of the melody that captures all the youthful and heroic tones of the original. The arrangement suffers somewhat from octave-laden accompaniment, abrupt transitions, and a poppy character. However, it still largely manages to convincingly translate the original's melody on to piano, while making it enjoyable to play and listen to.

Essentially all other additions of the album maintain the melodies and characters of the original pieces on piano. "Battle with the Four Generals" and "Last Battle" both have a more serious quality to them with their dramatic chord sequences and pounding octaves. "Way to the Earth" meanwhile is one of the more colourful and lavish additions to the album with its gorgeous melody and airy development. There are also more contemplative entries such as "Recollections" that are treated in a more conventional balladic way like so many other piano arranged albums out there.

Keiichi Oku persevered to transform even several less developed pieces from the series into fully-fledged piano arrangements. "Arc", for instance, was a very brief and vanilla theme tune in its original rendition. Somehow Oku manages to transform the tune into a rich and vibrant five minute performance here. Some parts are written in the style of a light rock anthem, complete with an enpowering if obnoxious alternating octave bass line, whereas others are written in the style of a jazz showpiece. It's a true improvisation that brings out the very best of the once uninspiring melody.

At the end of the album, Oku offers further jazz stylings in the melancholic lounge performance "MusicMan". It's a beautiful interpretation of the original vocal piece and even features a little more harmonic exuberance than the rest of the album. Following an extended nine minute rendition of Arc the Lad II's ending theme, "To Tomorrow" closes the album in a heartfelt and pensive manner. Like Oku's other contributions, this track does have its superficialities and naivities, but overall it makes the most of the original material and is satisfying to experience.

Although a fairly average piano album overall, the Arc the Lad Piano Album will still mostly satisfy fans of the series' music. It manages to recreate the melodies and moods of the original pieces while presenting them as fully-fledged piano pieces. Keiichi Oku's approach leans more towards the conventions of light jazz and pop music than classical greats, resulting in some fairly bland harmonies, though this seems fitting given Masahiro Andoh's own band background and the nature of the original pieces. There is nevertheless plenty of diversity on the album and more than enough to offer a wholesome experience.

Album was composed by Масахиро Андо and was released on July 19, 2000. Soundtrack consists of 12 tracks tracks with duration over about 55 minutes. Album was released by Village Records.