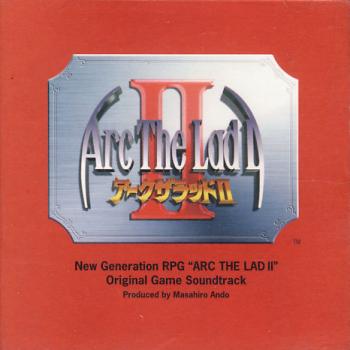 Following the mediocre score for the original Arc the Lad, Masahiro Andoh returned to score its sequel in 1996. He managed to improve on the score in several ways, ensuring his compositions were more elaborate and better suited for the game. However, his offerings are still a little uninspiring for stand-alone listening.

The improvement of Arc the Lad II's score compared to its sequel is immediate evident with "Elc". It's an excellent theme for the new main character with its unforgettable melody. In addition, it is more lavishly orchestrated than tracks from its predecessor and is well-produced for its day. Above all, the composition sounds less like it comes from stock music libraries and seem more specifically intended for the game, managing to express a genuine heroic personality without relying too much on clichés. It's a little on the short side, but compensates with great quality. Hardcore fans should nevertheless note that a bonus arrangement of "Arc" is featured on the Arc the Lad I & II Soundtrack Complete.

The action themes seem much more suited for combat this time after the bland and light approach of the original. "Battle 1" is styled off Final Fantasy's normal battle themes, with its upbeat melodies and turbulent development, though can grow someone obnoxious on repeated listens in the game. With their mixture of playful and dissonant features, rock and orchestral stylings, "Battle 2" and "Battle 4" have a fascinating effect in and out of the game and rival even those of Hiroki Kikuta in terms of quirkiness. "Last Battle", while still lacking the development to really stand out, captures the ultimacy of the final encounter with its conflicted march-like orchestration.

Though it features at the start of the release, the "Theme of Arc the Lad" unfortunately wasn't re-recorded for this soundtrack and is therefore as unsatisfyingly short as its original rendition. Of the remaining centrepieces, "MusicMan" is a lounge jazz theme featuring beautiful vocals by Cara Jones and a piano-based accompaniment. This track has a special effect in the game and manages to be spell-binding on the stand-alone soundtrack too. It's a little cheesy, but genuinely emotional and memorable. The two ending themes have a surprisingly deep quality that matches the bittersweet tone at the end of the game. "To Tomorrow" is especially impressive with its small ensemble orchestration.

Lyrics by: Cara Jones (12)
Album was composed by Хиротака Идзуми / Масахиро Андо and was released on December 12, 1996. Soundtrack consists of 47 tracks tracks with duration over more than hour. Album was released by Antinos Records.