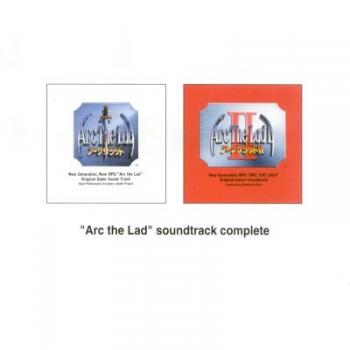 Arc the Lad and its sequel were among the PlayStation's first role-playing game, hitting the console two years before Final Fantasy VII and Final Fantasy Tactics redefined the genre. Masahiro Andoh, famed leader and guitarist of jazz fusion band T-Square, was hired to compose the scores in collaboration with several arrangers. Blending his trademark sound with various RPG staples, he initially struggled to produce memorable or fitting compositions, though improved somewhat on the sequel. The Arc the Lad I & II Soundtrack Complete is a compilation of both soundtracks.

The first disc is dedicated to the complete soundtrack of Arc the Lad. It opens with the "Theme of Arc the Lad", a very typical march written in the spirit of television theme tunes. The brass melody here is a good fit for the bold and youthful main character Arc and is fairly memorable despite its derivative qualities. The track also features high production values — orchestrated by Keiichi Oku and performed by the Royal Philharmonic Orchestra — that ensure it makes quite an impact in the game. However, it lack elaboration compared to the full rendition of the theme on the Arc the Lad Original Game Soundtrack, ending after just 80 seconds.

Despite the orchestrated introduction, a lot of the soundtrack references the mainstream-targeted styles that Masahiro Andoh is known for. Character themes such as "Arc", "Tosh", and "Gogen" are typical of his jazz fusion music with their slightly catchy electric guitar leads and light-hearted backing. Sadly, like so many other tracks on the soundtrack, they greatly lack in terms of development and also fail to represent much about the characters, serving more as transient theme tunes than character explorations. Others have a bit more personality, such as the eccentric "Chongara" or the effeminate "Kukuru", but they still loop after 15 or so seconds.

One of the better features of the Arc the Lad in context is the large number of battle themes. Given the nature of the game, Andoh generally focuses on conveying fun and naivity in the battle themes, rather than danger like most RPG counterparts. "Battle 1" arguably goes too far and could fit in some beach resort with its Latin jazz stylings and mellow panpipe leads. "Battle 3" has a playful circus-like feel to it, while "Battle 7" is another cookie-cutter light rock theme. It's only with the semi-orchestrated final battle theme that Andoh introduces any drama to the combat, but even then it is a little too understated to make a big impact like Final Fantasy or even Zelda would.

There are a few more mature entries on the Arc the Lad soundtrack. Given the superficiality and brevity that follows, "All Beginnings" is a surprisingly decent piece of cinematic underscore that undergoes an impressive evolution. "Four Generals" is also a fine composition to reflect the more serious undertones of the story and is composed in a similar spirit to Nobuo Uematsu's themes. Of the more emotional entries, "Separation" manages to tug at the heartstrings with its simple piano melody, while "Recollection" focuses on nostalgic suspended string motifs. Neither are ground-breaking, but they serve their effect in the game well and are decent transient additions to the album.

Following the mediocre score for the original Arc the Lad, Masahiro Andoh manages to improve on the original game. The production quality is slightly improved and the compositions are generally more elaborate. Furthermore, the compositions sound less like they came from stock music libraries and seem more specifically intended for the game. For example, "Elc" is a great theme for the new main character with its unforgettable melody and lavish orchestration; it's a little on the short side, but compensates with great quality. "Arc" also returns, but in a slow and intimate arrangement that gives the melody a more personal quality.

The action themes seem much more suited for combat this time after the bland and light approach of the original. "Battle 1" is styled off Final Fantasy's normal battle themes, with its upbeat melodies and turbulent development, though can grow someone obnoxious on repeated listens in the game. With their mixture of playful and dissonant features, rock and orchestral stylings, "Battle 2" and "Battle 4" have a fascinating effect in and out of the game and rival even those of Hiroki Kikuta in terms of quirkiness. "Last Battle", while still lacking the development to really stand out, captures the ultimacy of the final encounter with its conflicted march-like orchestration.

There are also some clear centrepieces on this soundtrack. Most notably, "MusicMan" is a lounge jazz theme featuring beautiful vocals by Cara Jones and a piano-based accompaniment. This track has a special effect in the game and manages to be spell-binding on the stand-alone soundtrack too. It's a little cheesy, but genuinely emotional and memorable. The two ending themes have a surprisingly deep quality that matches the bittersweet tone at the end of the game. "To Tomorrow" is especially impressive with its small ensemble orchestration. The album ends with a bonus special mix of battle cries from the game set to music.

Note that, despite its name, this compilation is not quite complete and omits several tracks, including the full opening and three ending themes of the Arc the Lad score. Nevertheless, this is the only soundtrack release for the original Arc the Lad, although the sequel has its own exclusive album release. The music itself is mediocre at best and Masahiro Andoh was clearly a dubious choice to lead the series. However, the music will bring back good memories for many who have played the games, so may still be worth purchasing.

Lyrics by: Cara Jones (D2 - 9)
Album was composed by Хиротака Идзуми / Масахиро Андо and was released on November 03, 1999. Soundtrack consists of 85 tracks tracks with duration over more than hour. Album was released by Antinos Records.