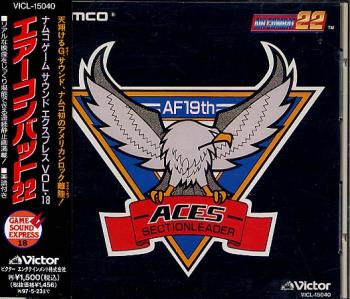 Air Combat 22 is a spinoff to the original Air Combat, both released for the Arcade in the mid-90s. While the short Air Combat score was featured in the Namco Video Game Graffiti Vol. 10 compilation, the Air Combat 22 score received a release on its own release. Although the series is now known for its orchestral music, it was quite different back in the day with a focus on retro rock music. Back then, it was Kazuhiro Nakamura, Hiroyuki Kawada, and Keiichi Okabe that ruled the series, all of whom have since left Namco. Although the rock focus is tempting in theory, there are major limitations in the Namco Game Sound Express Vol. 18 - Air Combat 22 release.

The album opens with a series of fanfares. While acceptable in-game and quite catchy, they reveal right away two of the three biggest problems of the score. The first is that, even when looped, the tracks tend to be very short, ranging from 20 to 90 seconds. This adds up to a mere 20:16 playtime altogether. Furthermore, most of the tracks feature voice-overs. In principle, I regard this as a bad thing on any soundtrack, since the purpose of a soundtrack release should be to display music independently of the game audio. If Namco was proud of the voice integration, they could have easily added a bonus voice collection. What's more, the voice acting itself is pretty cheesy in both writing and performance, with lame lines such as "This is not a drill. Repeat. This is not a drill" and "This is the real thing!!".

The main theme "If the Sky is Burnin' Out" reflects the rock-based approach to the score. Kazuhiro Nakamura adopts a straightforward approach of using a few rhythm guitar power chords and adding a few keyboard chord progressions. While it creates an illusion of substance, it's actually extremely underdeveloped and generic. That said, it may have sufficed if the backing wasn't so jarringly synthesised. That's major problem number three. Indeed, the ugly rhythm guitar sound persists throughout the album with "Get 'Em Down", "Surrender Me", and "Armed Up!" being the worst offenders. At least "Surrender Me" has some sort of catchy melody while the others are little more than chord progressions that any amateur could have come up with in seconds.

Fortunately, there is a little diversity on the album. "Ace Combat Anthem" definitely achieves a triumphant feeling as gamers take off to the sky, even if it is little more than a short chord progression. It's one of the few tracks in the early games with orchestral aspirations. Keiichi Okabe's contributions, "Compose Oneself" and "Among a Strain", are welcome despite their brevity since they take a funk-influenced approach and slightly more refined guitar work. Hiroyuki Kawada adheres a little more closely to Nakamura's rocking guitar-focused style, but at least brings some interesting features to the mix such as the unusual rhythms of "Spread Your Wings" or flashy improvisation of "Aerial Dance". Finally, there are a couple of more light-hearted themes, such as "Easy Way, Easy Go" and "Above the Sky, Below the Sky", that at least offer some contrast in mood despite their mundane content.

Overall, a shoddy release for a shoddy score. The Air Combat 22 soundtrack just about suffices as an accompaniment to the game with its aggressive rock focus and occasional catchy melodies. However, it is uninspiring on a stand-alone level with its formulaic styles, severe underdevelopment, grating synthesis, and lack of variety. It really sounds like it could have been composed within a week. What's worse, the soundtrack release only reemphasises the lack of elaboration with its short track times while often clouding the music with voice-overs. Only those who really enjoyed the music in the game should check this out as it isn't a worthwhile independent contribution to music.