007 Tomorrow Never Dies: The Original Soundtrack from the Video Game 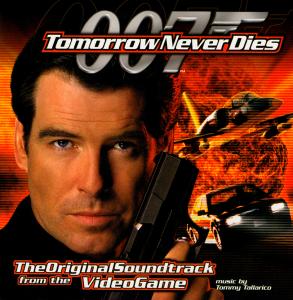 The follow-up video game to the critically acclaimed GoldenEye, James Bond 007: Tomorrow Never Dies, was a major disappointment in practically every sense. However, its score was still a fairly big deal at the time of its release. The majority of the production was handled by Tommy Tallarico, Howard Ulyate, and Todd Dennis of famed production studio Tommy Tallarico Studios, though Sascha Dikiciyan and David Valencia actually offer some of the best contributions. They collectively intended a modern action-packed accompaniment to the game, but one that still remained faithful to the musical roots of the series.

The first track is a direct reprise of Monty Norman's "James Bond Theme". Everyone knows this classic and its inclusion here is pretty relevant, since the majority of the subsequent tracks integrate the theme in one way or another. The arrangements of the theme are diverse — ranging from thrashing guitar interpretations in "Confrontation" to sassy infiltration beats in "Detonate". In that sense, the score is a little reminiscent of John Barry's scores, which often reinforced a single leitmotif — often the main theme — with multiple renditions in different moods and styles.

However, the thematic continuity of the album is also a potential weakness. Essentially every theme on the soundtrack integrates the main theme, some more prominent than others. This both labours the Norman's original material and starves the score of any defining new melodies. It was sensible for the team to focus on the main theme, but it just goes too far. Some will feel relief when listening to "Infrared", since the majority of the piece is totally novel and excellent. However, the conclusion of the track includes the obligatory five notes from the James Bond theme yet again... Indeed, no track is completely free from Norman's now-infamous theme.

In terms of production quality, the album is nevertheless impressive for its time. I was particularly impressed by Sascha Dikiciyan's energetic techno and rock blends in tracks like "Arms Bazaar", "Confrontation", and "PPK". In a move that will divide fans of the series' music, they represent a marked shift away from the series' other game and film soundtracks with their emphasis on riffs and beats, rather than melodies. While they sound a little dated today, they were cutting-edge tracks for the time and an immersive accompaniment to the gameplay.

The contributions from Tommy Tallarico Studios tend to be a little more superficial in composition and synthesis. However, there are certainly highlights among them, such as the groovy "Hotel Atlantic" and "Decoder" that depict infiltration in a suitable semi-serious manner. The closing vocal theme — specially composed by Tommy Tallarico for the game — is also a notable deviation from the rest of the score with its lounge jazz vibes. However, it suffers too much from an awkwardly balanced, poorly intonated vocal performance to be an actual highlight.

Overall, the James Bond 007 -Tomorrow Never Dies- Original Soundtrack turns a potential novelty into a total bore. Though there is rationale behind the use of the series' main theme, the soundtrack labours it to the point the famous chromatic chord progressions become barely tolerable. It's a shame as the score was relatively accomplished technically and stylistically for its time too. Though elements of the score are a step up from GoldenEye, the team here could have learned something from Graeme Norgate's approach to thematic development.

Track 17 doesn't appear in the game.

Album was composed by Говард Улэйт / Монти Норман / Sonic Mayhem / Todd Dennis / Томми Талларико and was released on January 11, 2000. Soundtrack consists of 17 tracks tracks with duration over about 40 minutes. Album was released by Chapter III Records. 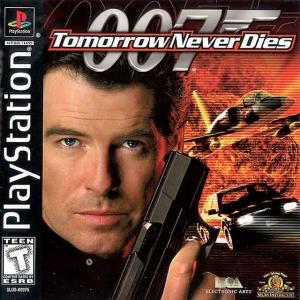