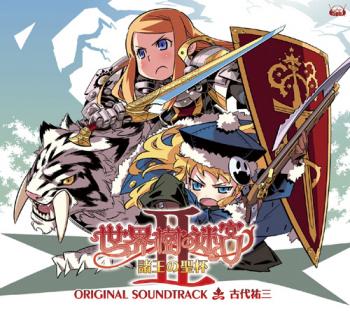 The DS has provided a means for Yuzo Koshiro to revisit the times of old and distance himself from the expensive epic productions of next-gen consoles. His score for Atlus' 2007 dungeon crawler Etrian Odyssey (aka Sekaiju no MeiQ) was composed and synthesized in a way that resembled an old-school RPG. The soundtrack was a massive successful, receiving widespread critical acclaim and selling many thousands of copies. The cult game itself was successful enough to inspire the sequel, Etrian Odyssey 2: Heroes of Lagaard (Sekaiju no MeiQ II Shoo no Seihai). Of course, Koshiro returned and created 29 pieces of music presented in two sound formats across a three disc soundtrack. Unlike its predecessor, the PC-8801 original version comes first and the slightly downgraded DS version follows from the middle of Disc Two. Does the music here meet the high expectations set by Etrian Odyssey? To give an idea of what to expect, here is a quote from the composer himself:

The soundtrack is introduced by the short but sweet "Come On, Start the Adventure!" Capturing the imagery of a new dawn, the first section will inspire reminiscence of Etrian Odyssey with its resemblance to "Spinning the Tale". However, the soothing organ-based conclusion shows an even more emotional and challenging journey lies ahead. With cheerful brass melodies and militaristic percussion, the initial town theme "Those Who Will Carve Their Name in Legend" is written in the same style as Etrian Odyssey's counterpart, but features a different melody. The main town theme "Vast Lands Spreading in the North" captures the spirit of a Super Nintendo RPG town theme and is utterly endearing thanks to its memorable calming melody. Its short night counterpart "The Wind Doesn't Draw Heroes" depicts a slightly different atmosphere with its laid-back jazz vibes. Another of the shortest additions to the soundtrack is the palace theme "Beautiful and Sublime Lands". Its multifaceted organ melodies are oddly akin to ActRaiser's "Sky Palace". On this initial assessment, it's clear there is considerable continuity with Etrian Odyssey, but not at the hindrance of ingenuity and emotional depth.

In the first dungeon theme "Woodland Ruins", a gentle six bar introduction gives way to mellow dance-like melody with sparse plodding accompaniment. Its innocent exploratitive character depicts the emotions of the game's characters in contrast to Etrian Odyssey's more mature and scenic "The Green Green Woodlands". Nevertheless, the entrance of an expressive and exuberantly accompanied second section at 1:41 ensures the composition is deep and well-rounded. For the second dungeon theme "Ever-Scarlet Forest", Koshiro creates colour and mystery with many impressionistic features. In the first eight bars, ghostly melodies descend above misty arpeggios in E minor, leading to a sublime resolution by a D major chord in its second inversion. An eventual comforting modulation to Ab major yields a series of dominant modulations, creating an emotional climax before the piece approaches its loop even more enigmatically than it began. "Woodlands of Frozen Flowers" retains this emotional intensity with its gorgeous contemplative melody and fantastical harp work. It also best exemplifies how Koshiro aimed to produce especially well-developed compositions for the sequel, developing fluidly and subtly over its 7:13 playtime.

One difference between this game and the prequel is the length of the tunes. I have made the dungeon themes one minute longer than in the predecessor. That's because I thought a longer track is better, seeing how the player will spend a long time walking around in the dungeon." - Yuzo Koshiro

Are the battle themes also on par with Etrian Odyssey's? Unfortunately, the main melody of the normal battle theme "The First Campaign" lacks the flow and catchiness of its counterpart "Initial Strike". The theme suffices in context thanks to its eccentric development and rhythmical impetus, but is by no means a classic. The f.o.e. battle theme "A Sudden Gust of Wind That Calls for Death" is a direct arrangement of its Etrian Odyssey counterpart. The original was a static track defined by clichéd attempts at crisis orchestration and an unrelenting obnoxious bass line. It's very disappointing that one of Koshiro's only direct arrangements here is based on one of the weakest tracks of its predecessor and the exuberant additional features don't redeem it from fundamental flaws. It seems that this type of track is one of the few things Koshiro isn't good at. Incidentally, the ostinato-based tension theme "Fresh Blood and Darkness" is another unlikely arrangement from Etrian Odyssey; though the piece is very good at creating a mood, it's not particularly deserved of one of the few direct arrangements. The return of the victory theme "Get the Treasure" is understandable and welcome though.

Returning to the dungeon themes, new age influences are apparent in "Cherry Tree Bridge". Introduced by soothing synth vocals, it transitions into a primary section marked by mystical arpeggiated acoustic guitar chord progressions. However, the melody is rather youthful and a bright spirit is further emphasised by the major modulation during the chorus. This dichotomy of moods creates a very uplifting listen overall. The final dungeon theme "Heavens' Rock Seat" captures a sense of impending climax with its driving pace, firm chord progressions, and chorus-led climax. Despite encompassing plenty of intensity during its playtime, it is nevertheless primarily concerned with motivating the listener with mostly bright melodies. As a result, it is welcome change from the epic approach of most RPGs and does not feel out-of-place in context. There is also a bonus dungeon theme, "Forbidden Forest". The most sombre addition to the set, the memorable melody embodies the 'elegance in simplicity' old-school game music is known to offer. However, it also desperately wanders through extended suspended string supported sections to the point where it becomes barely fathomable. A novel addition to the series supporting another statement from Koshiro-san.

In regard to the characteristic of Etrian Odyssey's music — that is the sound using the FM sound source — I have also increased the variation of sound. - Yuzo Koshiro

The second half of the soundtrack also features strong battle and event themes. The normal battle theme is replaced with "Inspecting the Resounding Weapons", a piece of cheesy old-school rocking at its finest. Extremely effective in context, the boss battle "Scarlet Rain" is an exhaustively developed orchestration marked by driving bass lines and rasping dissonant chords. The special battle theme "Guardians of the Sorrowful Ice", in contrast, fascinatingly develops around obsessively repeated melodic fragments. Approaching the climax of the game, there are two event themes — "Cherry Trees and Wings" broodingly combines continual triplet motion with supporting mysterious chord progressions and "Azure and Silver" recounts the melodic old-school vibes earlier in the soundtrack prior to the final battle. The climax of the game comes with the powerful orchestrations of "Last Battle" and "Heavens' Governor", which wonderfully depict evil. However, given the bonus area, it doesn't quite end there; there's also the delightful bass-driven rock piece "Shiver" and the Etrian Odyssey arrangement "Shiver" to represent the ultimate foe. Both ending themes, "The Heroes' Return" and "400 - The Adventure Has Ended for Your Group", are light rock pieces written from the perspective of the protagonists once again. Melodically strong, there is a good balance of new melodies and reprises of familiar ones.

Overall, the Etrian Odyssey II soundtrack is on par with its predecessor. Once again, Yuzo Koshiro captures the spirit of old-school game music with sedate town themes, catchy rock themes, and beautiful synthesis. However, he also produces a very emotional soundtrack featuring beautiful dungeon themes, personal event themes, and a dramatic climax. The only letdowns are the mediocre normal battle theme and the lazy choice to arrange a couple of the worst pieces from the predecessor. Other than that, this soundtrack is packed with highlights from start to finish and is a fine mix of continuity, refinement, and change. It will be enjoyable to anyone who enjoyed Etrian Odyssey's score or likes emotional melodic music in general.

Album was composed by Юдзо Косиро and was released on March 21, 2008. Soundtrack consists of 58 tracks tracks with duration over more than 3 hours. Album was released by 5pb. Records.