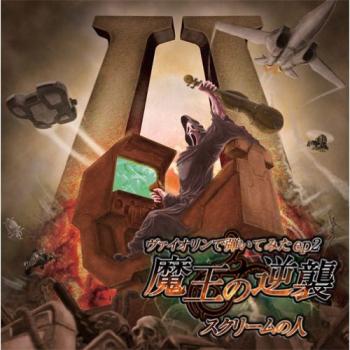 Earlier this year, Nico Nico Video sensation Scream de Hito released an album through Supersweep containing six arrangements from anime composers. Just recently, however, he released a new album containing six arrangements from classic video games featuring the three returnees from the last album and SuperSweep's principal members. How does this album stack up to the original?

The album opens up with Ayako Saso's arrangement of "Morning Music" from Gradius. It's a very beautiful theme, reminiscent of chamber music. The simplistic focus on a string quartet arrangement was a nice way to start off the album. Later in the album, Norihiro Furukawa's arrangement of Hisayoshi Ogura's "Daddy Mulk" is an upbeat offering. Some beautiful piano work that accompanies the violin, which is spectacular on this piece. There are also some interesting sounds added in the accompaniment that kind of sound like some subtle vocal samples, but it could also be some subtle electronica as well.

Takayuki Aihara arranges two themes on this album. The first, the iconic "Vampire Killer" from the original Castlevania, is an interesting take on the original. As opposed to the myriad of rock arrangements, Aihara chose to go down the orchestral route. Complete with choir, it offers a different perspective on the classic theme. It's a great fit with the violin. Towards the end, it gets a bit more upbeat with the addition of some drum pad work, but it still retains this classic beauty. His other theme, Night Striker's "Urban Trail", is absolutely stunning. The violin, as expected, is a beautiful accompaniment to the lush accompaniment of subtle sound effects and electronica. There are even some vocal samples, from what I assume are the original game, which add a pleasant touch. This is probably the standout track for me.

Both Yousuke Yasui and Shinji Hosoe offer some rock arrangements. Yasui's arrangement of "After Burner" retains the energy of the original with its heavy rock riffs and violin work. It's another favorite of mine. Sticking with Hiroshi Kawaguchi's Sega scores, Hosoe's arrangement of "Like the Wind" from Power Drift is a softer rock theme. The guitar isn't nearly as prominent, but it still has some great energy and the mix of electronica on occasion is nice. The violin, as with the rest of the album, is the star. There is also a secret track from OutRun entitled "Last Wave," arranged by Taihei Sato. It's a beautiful piano and violin theme, complete with crashing wave sound effects. It's a stunning way to end the album the way it started, with some music you can reflect upon.

The second outing by Scream no Hito is just as good as the first one. The themes are probably a bit more accessible or familiar to listeners as they come from classic video games, rather than from animes. There are some nice arrangements on here, with a variety of styles. If you are interested, you can special order from VGM World, but I'd couple it with another album or two so you can save on shipping costs.