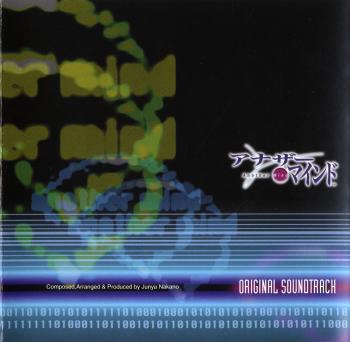 Though Junya Nakano's first solo work for Square released as an Original Soundtrack was the Another Mind Original Soundtrack, the album was not merely a demonstration of a newcomer trying to find his grip. Instead, it was an admirable display of all the things he had learnt over his career, which began a number of years before 1998. Indeed, having already composed for a number of arcade scores for Konami and having collaborated with various other composers on Square's scores for Tobal No. 1 and Front Mission: Gun Hazard, it was time that he had his own solo role. Though the score for Another Mind was not necessarily a popular one, thanks to the obscurity of the game it accompanied, those who listened to its music were often enticed by its quality. Highly atmospheric, yet maintaining a generally laid-back feel throughout, the music is nothing like anything else heard on a Square score before it. Though mostly ambient and written in the space of just two months, this does not hinder the overall enjoyment of the listening experience, thanks to the inherent rhythmical quality of many tracks and the addition of a number of warm melodies throughout. As the game's development director notes:

Within the lyrical echoes of its urban sound, Nakano's music possesses strength borne of a core of stoicism. I suggest you try submerging yourself in the unique, mature sensations of Another Mind. It's a work made for anyone to enjoy, even those of you who just wish to smile. - Keizo Kokubo

The album is introduced with "Another Mind," a unique theme that develops and thickens in a truly sensational way. There are no particularly strong melodies and the track is largely built up on repeated motifs, but this is not a problem and merely serves to add to its unusual effect. The layering techniques Nakano employs have profound emotional effects. The track entitled "Introduction," however, is nowhere near as good. It's 38 seconds of heavy electronic noise and is host to an extremely cheesy melody. As well as the fact it is underdeveloped, the style of the theme simply doesn't fit in an otherwise laid-back album that uses acoustic instruments predominantly. Nonetheless, the overall introduction to the album is a strong one and "Another Mind" is a timeless classic.

It is with the relaxing themes that Nakano tends to truly shine in this soundtrack. "Reconciliation" is a particularly gorgeous track, and this is thanks to its charming slow chord progressions, atmospheric instrument use, and delicate melodies. This theme is likely to be charming to all, and it doesn't have the same repetitiveness associated with most other tracks on the album. "Guiding Wind" is another fresh and innovative track; it combines slow and slick jazz piano melodies with some synth overtones. Its two arrangements emphasise the splendour of its melodies even further, and while they lose the 'new age' feel of the original, they are still fine works in their own right. "Mind Therapy" is another strong one, and though one of the most repetitive tracks on the album, its uniformity adds to its slow, subdued, and lulling nature, which is needed for it to have therapeutic effects!

"A Drop of Anxiety," the first of the ambient themes on the soundtrack, combines lush plodding piano chords with a fragile chime melody. While very beautiful, there are also some undertones of anxiety present, making it even more unique. "Impulsive Heart ~Illusions~" is less melodic than "A Drop of Anxiety," but successfully creates a paradox once more by creating both a sense of both uneasiness and peacefulness. Though an ambient work, it makes quite a good impression nonetheless. Unfortunately, the same sophistication is not associated with the "Impulsive Heart" and "Impulsive Heart ~Organ~" themes, however. After a few listens, both themes quickly descend from being cute and fun to being two of the most grating things known to man! "Dreamy Cat ~Within Illusions~" follows a similar format to "Impulsive Heart ~Illusions~," sounding surreal once more. Its basis, "Dreamy Cat," is much more intriguing, however; blending a cold and menacing music box melody with eerie synth effects, it sounds like something straight from the Resident Evil series.

Another set of highlights in the album are the three band music tracks, which presumably form a basis for certain in-game musical events. Though "Band Music ~Climax~" is horribly underdeveloped, the other two are both strong rock themes. "Band Music ~Big Power~" uses overdriven guitars prominently and successfully, creating an enormous amount of power, particularly at the start of the theme. Though it loses its sense of direction a little in some of the passagework, it eventually regains its original glory. "Band Music ~Despair~" is far stronger, however, and features some marvellous electro-acoustic blends and unprecedented electric and acoustic guitar mastery. There's so much overwrought tension in this theme, it feels ready to explode in one's face. Nakano rarely creates themes like this, yet when he does, he does them well. Even VGM guitarists are likely to consider these creations to be impressive.

Some say the action themes are the downfall of the album, since none of the themes are overwhelmingly powerful; however, this really isn't the case, as the unusual approach to action themes simply makes the album even more appreciable on a deeper level. "Piece and Piece" is particularly interesting. Based around an endlessly repeating tuned percussion motif, it continually builds and builds with the addition of more instruments. Though the initial motif is a little annoying after a while, the thickening of textures and timbres is done masterfully. "A Senseless Act of Violence," the darkest theme on the album, is even stronger, and the way a variety of motifs are combined gives the theme a powerful throbbing beat throughout is very effective. "An Endless Chase," possibly the crowning achievement of the album, is engrossing thanks to its unique rhythmical qualities. Though the motifs used are extremely repetitive and the chord progressions are very slow, this doesn't hinder the quality of the theme, as it creates the rhythmical impetus that is so essential to its overall nature.

The conclusion to the album is just as strong as the introduction. The penultimate track, "Self-Amplification," is a unique final boss theme that uses Nakano's layering approach for instrument addition once more. The more it builds up, the better it becomes, and some of the blends of sounds that are created are truly amazing to hear. The "Finale" just about fits the trend of Square soundtracks having absolutely excellent ending themes. It integrates several melodies in a medley-like fashion, using the melody heard back in the "Introduction" theme most prominently. Fortunately, Nakano's use of this melody is much more sophisticated here, meaning it doesn't sound cheesy or out-of-place. Though the theme does grow a little repetitive and could have benefited from using a few more themes more prominently, the theme succeeds as a whole and creates a heartfelt conclusion to the soundtrack.

I adopted the simplest system I could, and went about composing with practical efficiency. Even with the high pace of composition — the fastest completed piece taking some ten minutes, other pieces taking at most a few days — I made no sacrifices in quality, and work proceeded steadily. Finally, as I'd initially hoped, I think I managed to compose music with a slightly different style for me. - Junya Nakano

Indeed, Another Mind's music is certainly unique and of high quality. The way Nakano is able to create these beats and rhythms through use of repetition is what makes this the case. Though the instrumentation use is effective and the use of certain melodies adds warmth and interest to the soundtrack, it is primarily the rhythms that really drive it and make it so different. There is no doubt that the idea of listening to 75 minutes worth of music that features mostly repeated motifs is not most people's idea of fun. In fact, many people will probably find it downright boring and a complete turn-off. Still, all but four of the themes are impressive individually and there is more than enough stylistic diversity throughout the score to keep many listeners entertained. If you're looking for something different and want to admire how a composer succeeds in doing something so much out of so little (excuse the cliché), then this album might just be for you (if you're prepared to do a lot of searching on eBay, that is). If you're looking for conventional game music that is all melodic and fluffy, however, then avoid this one at all costs.