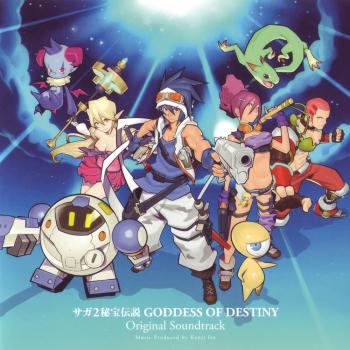 In 2009, Square Enix celebrated the 20th anniversary of the SaGa series with a DS remake... not of the pioneering first instalment of the series, but rather it's more expansive sequel. For the resultant SaGa 2: Goddess of Destiny, the series' lead composer Kenji Ito took the reigns once more to revisit his debut work. The final soundtrack features a mixture of new compositions, classic arrangements, and even a bonus arrangement. Yet with its blend of new and old features, can it satisfy a wide audience?

The soundtrack begins in glorious fashion with the new composition "Future Quest". Kenji Ito manages to convey the adventurous nature of the main characters with the heroic brass fanfares and vigorous string runs featured throughout this march. The composer shows his distinctive lyricism in full force throughout this composition, while hinting at the game's main theme towards the conclusion. Ito continues to impress with his subsequent interpretation of the original game's opening theme "The Legend Begins" (itself an arrangement of SaGa's "Prologue"). He focuses on conveying the serene scenery at the start of the game with an intimate duet between violin and guitar. Aya Yoda's violin solo enhances the radiance of Nobuo Uematsu's once technologically limited melody, while the dabs of orchestration and piano accompaniment are tastefully done.

The tracks featured during the gameplay of the DS remake generally lack the intricate orchestration and high quality synth of the cinematic tracks, probably due to memory limitations. "Lethal Strike", in particular, has a retro sound with its chiptune melodies and old-school rock and techno stylings. It manages to enhance the excitement and nostalgia of the already accomplished original, one of Ito's all-time best battle themes, and is an absolutely delight to hear in the game's battle screen. "At the End of the Decisive Battle", in contrast, reinvigorates the original with rapid orchestral passages and driving snare drums. In contrast to the original versions, the shift in intensity between the normal and boss battle themes is very pronounced here. In "Never Give Up", Ito continues to effortlessly blend retro and modern influences to yield a charismatic anthem.

Among the slower themes, "Wipe Your Tears Away" recaptures the sentimental aura of the original with its pensive rendition of the melody and soft string backing. It's not as impressive as Minstrel Song's interpretation, but completely suits the old-school flavour of the remake nevertheless. "Pillar to Heaven" and "Mystery of the Secret Treasure" offer a more ethereal sound with some inspired arrangement and synthesis. The former resembles the Romancing SaGa classic "Lost Woods" with its organic instrumentation and impressionist influences, whereas the latter is slightly more abstract and takes an epic turn during its second minute. Both tracks inspire imaginations much more in context than the originals ever did. "Wandering Soul" also manages to evoke much more emotion than the original, emphasising the haunting turns of the melody with more elaborate orchestration.

Not all the resynthed versions are welcome, however. The world map theme "Searching for the Secret Treasure" is a bombastic march-like take on the original that suffers from coarse synthesis and bland harmonisations. In this case, the Game Boy version manages to be more subtle and impressive. Other jarring interpretations include "Eat the Meat", "Ah!!", and Hero's Theme", though in the latter case this is principally due to deficiencies in the synthesis rather than arrangement. "Theme of the New God" and "Through the Cramped Darkness" are relatively disappointing interpretations of the villain and dungeon themes from the original as well. Despite Ito's efforts, the dark cinematic orchestration here isn't conveyed well with the DS synth and the final results somehow end up simultaneously sounding melodramatic and underwhelming.

Ito managed to flesh out the somewhat brief soundtrack for the Game Boy version with a range of new compositions. Two of these tracks, "Muse's Paradise" and "Where the Fighting Is", are actually alternative renditions of the main theme that convey entirely contrasting scenes. "Uh oh! Surrounded by Enemies" demonstrates that Ito hasn't lost his touch for writing charismatic and memorable melodies, and the rock organ introduction here is particularly entertaining. Somewhat less impressive is the title track "The Goddess of Destiny", which is reminiscent of Ito's less memorable compositions from Culdcept Saga with its slow-paced blend of string passages and new age synthpads. While serviceable in context, it lacks the melodic substance of the arranged themes on the soundtrack and is too understated to have a significant impact on the experience.

Coming to the climax of the experience, following the superficial old-school rock rendition of "Burning Blood", Ito saves the best arrangement till last with the final battle theme "Save the World". It's interesting how the personalities of Uematsu and Ito seem to blend together here into a lively mixture. The fusion of orchestra, rock, and techno styles here is superbly done and keeps the track interesting throughout its four minute playtime. The ending themes are considerably more mature and emotional than their originals, segueing through sentimental and triumphant sections with the cinematics. After some peculiar tribal rhythms, the soundtrack is closed with a bonus arrangement by Square Enix's in-house unit muZik. It's charming how the melodies of "Lethal Strike" and "Eat the Meat" are seamlessly blended here, though the technopop stylings are very superficial and potentially obnoxious.

For the most part, the SaGa 2: Goddess of Destiny expands on the original soundtrack with a range of emotional arrangements and new compositions. Some of the arrangements fall flat, due to their generic quality or poor synthesis, though many more satisfy with their blend of new and old styles and synths. Sitting on the cusp between new and old, the soundtrack won't be for all and may disappoint fans of the original trilogy or newer games in the series as a result. However, it's potentially a very likeable effort for those looking for a modest yet substantial enhancement of the original game's soundtrack.

Special Thanks to
Yasuhiro Takamatsu, Kensuke Matsushita (Dog Ear Records)
Album was composed by Кэндзи Ито / Нобуо Уэмацу / Yasuhiko Akanishi and was released on September 09, 2009. Soundtrack consists of 27 tracks tracks with duration over more than hour. Album was released by Square Enix.