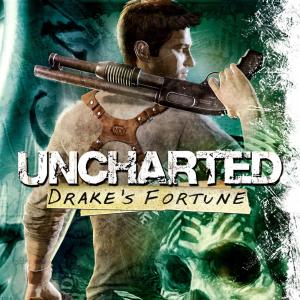 From its opening piece, "Nate's Theme", we get a clear sense of Greg's style. The track is simple, understated and yet compelling in a way that few game soundtracks can achieve. Percussion, Brass in four part harmony, and a simple string passage carry a memorable melody into fruition that ends almost as soon as it began. Several tracks like "Unwelcomed Guests" stand out. They demonstrate the emotional range into which Greg is willing to delve, as he allows his instruments the expressiveness to take on screams, wails, and laughter which mimic the human voice. It is at times genuinely disturbing for listeners.

Greg's use of ethnic percussion is superb, and all of the performances seem real and organic. You can literally hear the breath from the over-blowing on the native flutes. Close, intimate solo recordings add quite a bit to the impact of each piece. Take, for instance, "El Goddamn Dorado", which carries a tension that is relentless. Each performer, from the didgeridoo to violin and percussion, is contributing in a valuable way to each track — nothing is random or carelessly added to the score. It is this mastery of the abstract that gives Edmonson an edge with the Uncharted score. Each track is a dark and delicate work of art that never detracts from the main stage and simply adds to the lush environment. His tracks are content at add expressing a singular emotion, however deep or stirring, and then moving onward.

While the score primarily serves its purpose as a backing track to the game, there is a lot to absorb for careful listeners, especially if you are a fan of Edmonson's calculated, brooding style. In "Plane-wrecked", the string section spends nearly 2 minutes in a locked, tense vibrato that alternates in chromatic pitches, only ceasing briefly; but to listen to the painstaking detail of each string calls forth a beautiful sort of agony. In fact, this instrumental pallet recurs frequently throughout the score. The bed of percussion that underlies each track is effective for the most part, rarely achieving a sense of unwanted repetition. Each piece is short enough that it can introduce multiple ideas without repeating itself.

Ultimately it is hard to remove the body of Edmonson's score from its visual counterpart, but it is enough to stand on its own as an effective backing track and transcend into the realm of other great orchestral game soundtracks that have preceded it. By sticking to his guns, Greg is able to transform his orchestral strings, brass and percussion into a powerful score.

Tracks preview provided by iTunes. If you like Uncharted: Drake's Fortune Original Soundtrack from the Video Game, we strongly recommend to buy it. Support composers, artists and performers so they can release more music in the future. Furthermore, it's inexpensive. This album costs only 9.99 USD. Prices and shops where you can buy it are at the right column. Notice, Yandex.Music gives you opportunity to freely listen to this album. Absolutely legal. Without violations.