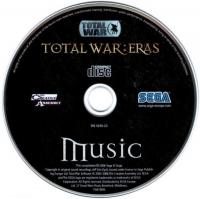 The Total War series is a critically acclaimed line of PC strategy games created by the United Kingdom's The Creative Assembly. Total War: Eras was the ultimate package for fans of the series, compiling together it's three early games (Shogun: Total War, Medieval: Total War, Rome: Total War), their expansions, a documentary, an art booklet, and even a bonus CD. The CD features a selection of music from each of the early titles amounting to a sizeable if still limiting 76 minutes playtime. In the case of Shogun and Medieval, this stand-alone content is exclusive to the album and the only way of observing the origins of the series. The album demonstrates just how Jeff Van Dyck has adapted as the composer for the series and is an interesting listen in its own right.

Shogun: Total War's soundtrack complements the elegant simplicity of the first game in the series. Most tracks are extremely minimalistic in their construction and serve principally as moody background music. Nevertheless, Jeff Van Dyck's ambient soundscaping is sufficiently good for the themes to have an impressive effect in and out of context. For example, it is chilling how primitive percussion and chanting emerge out of nothingness in "Shikoku Forest" or how unexpected electronic elements add to the uplifting and spiritual sound of "Shogun Temple". Although the soundscaping is characteristic of a modern ambient composer, the focus on traditional instrumentation throughout really enhances the ancient Japan setting. Van Dyck's shakuhachi solos, in particular, bring a lot of warmth and humanity to otherwise barren compositions such as "Myoko Call" or "Spirit World" and embellish the the new age influences of "Order of the Rising Sun". There are also some frivolous moments offered with the lyrical koto lead of "Yoh Hee" or the ancient dance rhythms of "Sakura Sunset" that work well in context. Although the pieces often lack in development and can have a sporadic feel to them, this is a competent and evocative score that makes the most out of its minimal components.

The compositions in Medieval: Total War are a step up from their predecessor in both length and elaboration. Jeff Van Dyck maintains the moody and traditional tone with his careful ambient soundscaping while carefully adapting the score to the new setting. Pretty much all the tracks have some depth to them, whether "Weeping Willow" with its heartrending flute lead against harpsichord continuo, "Sultan's Charge" with its bustling rhythms and Arabian infusions, or more typical percussion-driven action themes such as "Theodosius". Perhaps most remarkably, Van Dyck rejects the traditional Japanese influence of the Shogun soundtrack in favour of a Westernised choral use. The choral writing is effective throughout the soundtrack, whether the subtle yet striking counterpoint of "Cathedral of Doom", the edgy ritualistic performances of "A Heaten's Courage", or the reverberating backing chanting of "Crypt". Even more endearing is his use of radiant ethnic female vocals in "Walls of Mecca" and "Bedouin Song", a feature he elaborates upon in later soundtracks. A further innovation is his use of ancient Western instruments, particularly the nasally woodwinds in the light-hearted "Victory Day", "The Prophecy", or "Eid of Peace". Although no composition is a well-rounded masterpiece, they each have something musically interesting in them and add to the drama of the game.

It was with Rome: Total War that Jeff Van Dyck went all-out with his compositions. The action themes "Warrior March" and "Mayhem" instantly demonstrate the more epic production values; the percussion sounds more thunderous than ever while the orchestral elements are more developed and the primitive instruments fluidly integrated. The orchestral title theme meanwhile expresses more humanity than earlier themes in the series, constantly building up to beautiful moments before betraying listeners with sorrowful turns. In order to portray Rome in a familiar manner, many of the tracks channel influences from the famous Gladiator soundtrack too, especially Lisa Gerrard's work. While a little unoriginal, Van Dyck imitates the styles extremely convincingly while also integrating his own trademarks. "Journey Rome Part 1?, for example, homages the vocal use of the Gladiator score right away, treating the vocals as a soulful and radiant force against the deep ethnic infusions and still ambient timbres below. However, the actual primary vocal theme "Forever" for the game is a refreshing departure from the clichés of game and film music. The female vocals are written in a balladic style, but the ethnic influences, unusual lyrics, and ever-changing instrumentation keep things fresh. From the soft introduction to a sweeping beat-infested section all the way to the bittersweet conclusion, this one will inspire so many emotions.

Following the samples of three main soundtracks, there are a few tracks from their related soundtracks. Returning to the early days of the series, the tracks from Shogun Total War - The Mongol Invasion maintain a similar musicality to the main soundtrack, but feature some distinct tones. There is some very experimental use of ritualistic chanting in "Mongol Battle" and "Hooves on Steppes" while the rhythms and timbres of "Hooves..." and "Sands of Gobi" definitely seem more Mongolian than Japanese. However, a four track sampler is probably inadequate given the breadth of the material composed for the award-winning game. In contrast, the expansion Medieval: Total War - Viking Invasion brings the threads from the main Medieval soundtrack together; "The Norseman" is an encompassing and fascinating blend of the various forces and instruments while "Warships of the North" is another highbrow orchestral crisis theme. The album concludes with a glimpse of the then-upcoming Medieval II: Total War in the form of "Crack Your Head With a Tabla". It's clearly from this track that Medieval II's soundtrack is more of a continuation of Medieval's rather than another reinvention of the franchise. However, its action-packed orchestration is very well done and the fusion with percussive, traditional, and ethnic elements is top notch. It demonstrates Van Dyck has clearly come a long way.

The Total War: Eras Music set is a great way to commemorate the series' music. Perhaps the best thing about this soundtrack release is that, while atmospheric and engaging right from the start, it just keeps getting better. It is refreshing how Van Dyck reinvented the series' music with each game, but it's also clear that he developed his musicality as a whole with each instalment and progressively offers richer and more refined compositions. The music for Shogun: Total War and Medieval: Total War is certainly solid, but perhaps unworthy of a stand-alone release given the potentially inaccessible or uninteresting ambient approach. It's therefore much better to compile the soundtracks into a compilation like this where there is plenty of value for money and enough variety to keep listeners interested. Note, however, that the releases aren't complete and those wanting more complete soundtracks to the more recent games should look into alternative releases. Overall, this worthwhile package bonus reflects a modest yet profound musical accompaniment to a legendary game series.

Comes with Total War: Eras.
Album was composed by Джефф ван Дайк and was released on June 28, 2006. Soundtrack consists of 43 tracks tracks with duration over more than hour. Album was released by SEGA Europe.