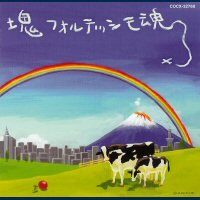 Katamari Fortissimo Damacy is the official soundtrack for the eclectic cult classic, Katamari Damacy. Most tracks were composed by little known composer Yu Miyake, but many other artists were gathered to help with vocals and extra composition. This soundtrack contains literally everything a great soundtrack should have, but obviously not every soul on earth could like it. We'll try to find out exactly whom this album is right for. But if this is so widely praised as one of the most "imaginative" and "original" soundtracks ever created, then is there really anything to argue?

When Katamari Damacy first came out, there weren't too many games like it, but these days I could find numerous weird and quirky games on the store shelves. I think Katamari kind of paved the way and let other developers know that it's okay to think outside the box or be quirky once in a while. This is not to say other companies haven't ever thought outside the box (Nintendo?), but Katamari really pushed the limits for the specific time. One thing that makes the actual soundtrack great is that it complements the game perfectly and at the same time can stand on it's own just as well. It's well constructed and extremely original. Although it's quirky and over-the-top sometimes, that usually works in its favor though obviously some will be turned off by the quirkiness. It's an extremely solid album too. Every song is as original as the next, and there is a lot of variation that should make the album have a wider appeal. It's all tied together by amazing bubbly electronic samples that we'll get into in a moment.

There is a small portion of interesting instrumentals worth mentioning before we get to the core vocal tracks of the album. "Walking on a Star!" is wonderful! It meshes these poppy / choppy 8-bit beeping sound effects with a smooth guitar line and the contrasting beeps really complement one another. You'll hear these bubbly electronic samples throughout this whole album. Vocal or not, when Katamari Damacy starts experimenting with these friendly electronic sound bites it shines like none other and fits with the concept of the game perfectly. "Walking on a Star!" is merely a menu theme and it definitely works like that, but when listening outside of the game it may sound a bit repetitive to some people.

"Angelic Gifts" and "Katamari ? Stars" also use this kind of instrumental contrast and they're certainly pleasing. "Angelic Gifts" is less catchy, but it's a much fuller composition. Though there are many choppy beeping sound bites, it forms together to be as crisp and clean as possible. The intro guitar sounds so raw and tinny but it also blends just fine and brings more depth to the sound. At times, these instrumental tunes cross the line from sound design to just plain artistic masterpieces. Just like some people don't enjoy some of the great art masterpieces, some people may just not enjoy this. Merely try to keep an open mind and you could find some great depth here and appreciate it whether it is in your taste or not. "Katamari ? Stars" is very gentle and sticks with the same theme. A very organic Asian flute is featured and it's cool to hear that instrument with the electronic samples just like the guitar. "Overture" is a great piano take on the main theme, but it's a little too short to be worth much. All of these instrumentals may not be what the album is known for and this is probably because they are more subtle and less in your face than some of the vocal tracks.

The last two "instrumental" tracks to mention are a bit different. Though you could argue that "Katamari March Damacy" and "Fugue #7777" are vocal, they are more like instrumentals that happen to use voices as their instruments. Both tracks have this extremely kooky and royal feel to them. If you played the game, then you would know the there would not be more fitting tracks for encountering 'The King of All Cosmos' than the fugue. he bonus track, "Katamari March Damacy", is great once it gets rolling too. If these tracks were played with some sort of brass instrument then it would sound like a very generic old-fashion royalty tune, but the electronic a cappella gives these tracks a whole extra dimension. Again, these tracks use vocals, but are non-lyrical.

The vocals tracks are predominantly sung in Japanese, but the track "Que Sera Sera", sung by Charlie Kosei, stands out as being the only track fully in English. This track is an amazing "Frank Sinatra" inspired track. It's catchy, charming, relaxing, and the lyrics are hilarious and fitting (as are all of the lyrics but it's a lot more fun when you can sing along!). It doesn't push the limits experimentally, but it shows another take on how the music in this game could be. While some of the instrumentals mentioned earlier were more experimental and artistic, this type of song gives the album something else it needs, which is some extra charm and humor. The game itself was very artistic and experimental, but it was very humorous in doing so and the soundtrack reflects both aspects perfectly. Having the follow up track be "Angelic Gift" is a little disjointing, but all in all the album is still solid. "Gin & Tonic and Red Red Roses" and "Roll Me In" are kind of an old school tributes in a way, but they are not as memorable for me (maybe because I couldn't understand the lyrics). I think they are still great tracks though.

I don't know how I made it this far without talking about the famous theme song, "Katamari on the Rocks". Before it, you can hear the same theme tune in "Katamari Nah-Nah-Nah" and it's a good hint on what's to come. "Katamari on the Rocks" is one of the most upbeat tracks on the album. It's a very percussive driven and fast paced tune. This version is almost a celebration of the game itself and it celebrates to its fullest. It certainly coined a recognizable melody too. There may be hints of the theme through out the album, but these tracks are the only ones where you will hear the melody in its full form.

There's some well-done pop, rock, and rap songs on the album. Most of these tunes are the tunes that play during the levels while the instrumental ones are not. They really help get you into the game. The first level's theme is "The Moon and the Prince". It has an extremely catchy background sample and has some very laid back rap. It would help if I knew Japanese, but sound-wise, the lyrics don't flow very well through out the song and it also starts to sound repetitive. Some might not like this rap idea in the first place, but it really does integrate with the style of the game. "Lonely Rolling Star" goes back to the clean beeping electric sound bites theme and is a much richer song. I think this song plays it slightly safe, but it gets away with it since it's very polished and catchy. It's probably one of the themes you will be wanting to listen to a lot of times especially if you want an warm electronic twist to a happy J-pop song.

While "Lonely Rolling Star" is a very friendly piece, some may be turned off by some other vocal tracks like "Wanda Wanda" and "You Are Smart". These tracks kind of touch on being both experimental and humorous. The only vocals you will hear in "You Are Smart" are 'you are smart' and same thing applies for "Wanda Wanda" respectively. It's pretty funny to base a song off that phrase alone but it also reminds me of some higher quality Daft Punk music. These tracks are both extremely electrically driven. By now you have probably also realized that this album is a very upbeat album.

Two last tracks worth a mentioning are "Cherry Tree Times" and "Katamari of Love". "Cherry Tree Times" is either going to be one of the best, or most annoying tunes depending on your taste. I think it all depends on how much "cute" your senses can handle. It's really a beautiful track with the flowing violin and guitar lines. It's face-paced but relaxing and one of my personal favorites. The children that sing the song are not exactly professional singers so their voices could easily annoy you unless you just love the idea of kids singing. "Katamari of Love" is a grand ballad from the heart used for the credits (where you are rolling up Earth's countries). It has a bit of melody from the theme song, but it is its own composition still. If you like the sound of a ballad like this then you will probably like this one. Again, it's just another example of the variety on this album.

An album can't be great just because it thinks outside the box. Katamari Fortissimo Damacy being outside the box is just the first step the composers took to make such a great soundtrack. The album is amazingly conceptual in how it fits with the graphics and game play in every way possible. On top of that it sounds extremely pleasing to the ears and could very well be a great album with no game attached (with a bit of lyrics tweaking maybe). It's fun, catchy, quirky, and every sound bite was polished to perfection though you won't find any mid-blowing technological advances taken. If you are looking for something a little more dark or moody, you won't find it here, but if you have any interest in what you have heard so far, then go out and buy this album right now.

Album was composed by Акитака Тояма / Asuka Sakai / Hideki Tobeta / Масаюки Танака / Ёсихито Яно / Yu Miyake / Yuri Misumi and was released on May 19, 2004. Soundtrack consists of tracks with duration over more than hour. Album was released by Columbia.