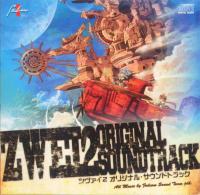 After the absolute masterpiece that was the original Zwei Soundtrack, I had extremely high hopes for this out of the blue sequel. I was shocked to say the least when I first heard this, as it really didn't live up to its predecessor at all. The Celtic sound is almost entirely absent, making room for J.D.K.'s usual Legend of Heroes sound to emerge in full force. If you can set aside the fact that this is nothing like the first addition, you can really see that this album isn't as bad as I originally thought it was.

The first thing I want to discuss is the few pieces that are somewhat like the original. "Artte Airport" begins with an acoustic guitar and piano for the intro, while a flute and background strings take the harmony. I'm not quite sure if this would fit in an airport, but it sure is a beautiful piece. When everything joins together for the climax it is almost a euphoric experience. Well, as much as it can be in its cheesy presentation. "Help Alwen" is pretty much an arrangement of the boss theme from the first game, only with more vibrant percussion and a more "open" sound. "Warm Feelings" is also one of my favorites on here. The piece subtlety layers violin and strings on top of a beautiful acoustic guitar harmony.

As for the new style presented here, there is way too much to go into. The battle themes are probably my favorite in this regard. "Dog Fight!!" takes a heavy synth rock approach, and lays it out flawlessly. It gives you a real sense of urgency without taking away from the overall soft feel of the game. The final battle theme was a huge shocker though. J.D.K. has a way of reinventing the wheel so to speak when it comes to their action themes. "Risk Everything on this Moment" has a heavy emphasis on a techno beat with the main theme of the game layered on top of that. While it isn't quite as epic as what I was expecting, it does lay out the more cutesy feel this game has perfectly.

Now we can move on to the most interesting section of this album, the area themes. I just have to mention "Brandy Heights" first, as it is by far my favorite piece on the album. The track starts off extremely cheesy, but almost instantly switches to a beautiful violin melody. The flute takes a turn in the spotlight for a short time before the piano comes in to steal the light. If J.D.K. wanted to reinvent themselves, this is exactly how I would want them to do it. "Roalta Village" uses the acoustic guitar again, but brings in pizzicato strings to enhance the melody. I wasn't a huge fan of this one at first, but the strings at the pinnacle of this track grew on me and I'm now hooked. Also notably, "Oldium Shrine" fuses the classic J.D.K. sound from the Legend of Heroes series with the Celtic side they introduced in the Zwei series. It is probably one of the best dungeon themes here.

The opening and ending themes bring something slightly different to the table. "Bokura no Mirai" introduces us to the heavier sound the album and game bring. While it isn't on the top of my list, it stands as a fitting opening theme and the vocalist holds her own very well. "Zwei 2 End Credits", however, bring us something I didn't expect. Here we have what is one of J.D.K.'s most epic orchestral pieces in the history of their existence. Obviously the main theme is present here, but they deliver it in a special way. About halfway through choir vocals are added in to reinforce the epic feel the strings started. While I wouldn't consider it the opus of J.D.K.'s orchestral experience, it is still one of their more fleshed out ending themes.

This album taught me a pretty valuable lesson. Just in writing this review, I discovered this album really does have a lot more to offer than I originally gave it credit for. I was somewhat bitter about the fact it was so different, but I do believe it does an outstanding job painting the more colorful world Zwei 2 has to offer. I just spent too much time comparing it to the original. I will warn everyone again though. Those looking for another Yasunori Mitsuda inspired album need to look elsewhere, as the entire Celtic feel of the original is for the most part absent. What you do get is one of J.D.K.'s best lighthearted albums. I will recommend this to anyone who is a fan of their older works from the The Legend of Heroes series or Vantage Master. What started out as a huge disappointment for me has turned into an album I return to frequently, and I believe you will do the same.