James Bond 007: Everything Or Nothing - The Videogame Score 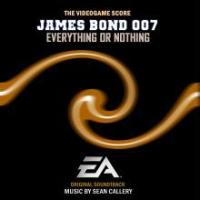 James Bond 007: Everything Or Nothing - The Videogame Score
Передняя обложка

While best known for portraying Jack Bauer on the 24 series, Sean Callery did find the time to depict another agent with the same initials in 2003, for his video game debut James Bond 007: Everything or Nothing. Following the promotional release of the soundtrack, Electronic Arts published additional music from the game in a digital release during 2005.

As with the promotional release, the soundtrack includes a full-length rendition of the James Bond theme. Sean Callery hints at his electro-orchestral tendencies here, but largely stays faithful to the melodies of the original. Most other tracks build on the material featured on the main soundtrack release using similar fusions. Highlights include "Rooftop Bike Chase" with its cutting-edge blends of orchestra and electronic components, "Jaws" with its formidable brass and piano discords, or "Russian Tank" with its nationalistic use of orchestra and chorus. They're not quite as exuberant as the material in the main soundtrack release, but are still quite effective and appealing.

Some tracks on the soundtrack nevertheless bring some originality to the score. Ideal for the infiltration gameplay, "Collecting Stuff in New Orleans" builds up tension by punctuating subdued electronic soundscapes with brass discords. It eventually explodes into action with some guitar riffs to excellent effect in the game. Deviating from the somewhat aseptic sounds of other tracks, the funk and rock influence here seems much more in line with the personality of the character. "Graveyard At Night" is another track that undergoes a spectacular evolution, with forces such as a ghostly chorus, eerie chimes, and formidable brass interjecting in a sporadic and disturbing manner.

Compared with the main soundtrack, there is a lot more filler on the digital release. Tracks such as "Bond Jumps Through Glass", "Save Katya", and "Quick Action" are all robust action-packed orchestrations, but are simply too short to be of interest. The remaining substantial tracks present, such as "Russian Liar" or "Mine Facility Fight", sound like typical pieces of action underscore with occasional Bond-style horn or other staple. They're hardly bad, but don't quite capture the charismatic personality and indulgent stylings at the core of the franchise. While they may share the same job, initials, and legendary status, James Bond and Jack Bauer are not equivalent.

Sean Callery's additional music for James Bond 007: Everything or Nothing is a good supplement to the main score. However, it isn't as creative or entertaining as the music featured in the main release. Most will be fine skipping this additional release, which is no longer officially available.

Album was composed by Шон Каллери and was released on November 09, 2005. Soundtrack consists of 21 tracks tracks with duration over about 45 minutes. Album was released by Nettwerk.