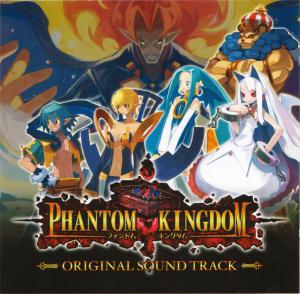 Makai Kingdom: Chronicles of the Sacred Tome, released in Japan as Phantom Kingdom, differed significantly from other internally developed RPGs by Nippon Ichi Software. For some reason, Tenpei Sato was unable to return and, in his place, a team comprising both long-term colleagues (Takayuki Aihara, Ayako Saso, Hiroto Saitoh) and relative outsiders (Hiroshi Takagi, Tsuyoshi Kaneko, Ryo Sakai, Tamiya Terashima) was assembled. They are able to offer a diverse and well-produced soundtrack, but do they manage to offer something with the same character and emotion as Tenpei Sato's scores?

The score for Phantom Kingdom features several defining themes, created by Takayuki Aihara. The main theme of the score is quite memorable and seems to capture the spirit of the protagonists in the game. Its initial treatment is a dubious one — namely an orchestral overture that randomly alternates between sounding epic and goofy — but makes an impact nonetheless. Its subsequent arrangements are often more subtle and help to bridge the score together. "The Devil's Entrance" meanwhile introduces the intended antagonist's theme for the score. Aihara gives a nod to Tenpei Sato with his cheeky yet sinister melody, but again isn't able to present it effectively; its arrangement in the epic orchestra and chorus theme "The Quickening of Fate" is especially over-the-top and ends up sounding clumsy and pretentious.

The score features many staples of RPG soundtracks. There are adventurous orchestrated setting off tracks like "First Campaign", punchy rock-influenced battle themes like "Burning Fighting Spirit", slow-building moody ambient scene-setters like "Cold Rain", and much more... The core features of these themes will be very familiar to RPG listeners and are arguably tired ones. Nevertheless, their treatment is certainly above par in terms of both composition and implementation. Just focusing in on "First Campaign", for instance, it's impressive how Ayako Saso manages to establish such boldness and dynamism right from the outset, while still maintaining a dainty dance-like tact. The development thereafter is particularly thorough, transitioning from a bold orchestral climax into a particularly fun jazz-influenced secondary section, before finally reprising the original melodic idea in a sophisticated variation. It's an excellent way to represent the scope of the world and it is pretty representative of the quality of the score as a whole.

The use of an ensemble cast certainly enhances the diversity of the soundtrack. RPG soundtracks tend to be diverse by nature, yet having numerous composers offering their takes on what setting, action, and scenario themes should all sound like emphasises this quality. The battle themes are especially diverse, ranging from rock anthems, to orchestral epics, to the more atmospheric kind. Certain composers were also able to offer anomalies that completely differ in style from the rest of the album too. Ryo Sakai's "JOKER", for instance, breaks up the largely orchestral introduction to the album with its light jazz vibes. Hiroto Saitoh meanwhile offers some rich fusions in tracks such as "Alexander the God fo Destruction" and "Transition of the Soul", both of which are particularly special in context. Similarly, Tsuyoshi Kaneko brings influences of both ethnic and electronic music into his tracks, culminating in the utterly unpredictable "The Devil's Descent".

While diversity keeps things interesting, does the soundtrack come together as a collective whole? Not entirely. The score jumps from style-to-style, composer-to-composer so much that it is often difficult to understand the bigger picture. Stylistic and thematic definition is often lost amidst the chaos that ensues. Such a feature is not present in the various Nippon Ichi scores by Tenpei Sato, who has a talent for creating a cohesive and fulfilling overall work that is still peppered with variety. Nevertheless, the soundtrack does have some sort of dramatic arch that is particularly evident at the climax. There is a nod to Tenpei Sato in the powerful arrangement of "Great Wilder Kingdom". Tamiya Terashima — creator of Falcom's Electric Orchestra albums — was entrusted to thereafter create arguably the most important compositions of the score, the final battle theme "Apocalypse" and the ending theme "Royal Road". In doing so, he offers the most sophisticated entries in the entire score.

It is best to enjoy this score for its individual parts, not the collective experience. As a whole, the score is wildly inconsistent in mood, style, and maturity and often also potentially alienating. However, relatively strong production values were maintained throughout and most pieces still fit their context. The score often stands out for its particularly exquisite orchestral compositions, spanning from "First Campaign" to "Royal Road", and all the fusions and experiments in other styles. It is these features that make the Phantom Kindom Original Soundtrack still a worthwhile experience. 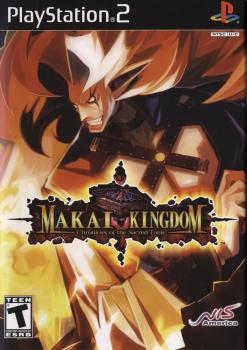