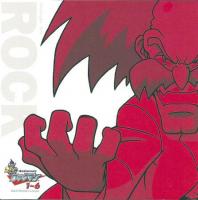 Wow. It's been 20 years since the first release of Rockman / Mega Man for the Nintendo Entertainment System. Who knew he'd still be alive and kicking at this day and age, even though the original Rockman has long been retired. Given that it is essentially his 20th birthday, he was given, as a present, rock and techno arranged albums. The rock arrangement album is by Tohru Iwao, the guitarist for the Guilty Gear series. Given his excellent guitar playing skills, how does Iwao with his first time arranging? Read on to see if it's worthy to rock out!

To describe this rock arrange album is pretty tough. It has its strengths, but at the same time, it also has its weaknesses. The track selection, for one, is probably one of its stronger points. However, like everything with this album, it is a dual-edged sword, but I'll get to that later. Arranging favorites such as "Dr. Wily Stage 1" and "Metalman Stage" from Rockman 2 and "Cutman Stage” from Rockman, there are sure to be some pleased by this album. I, however, am not totally satisfied. The album, on the whole, sounds great, but at the same time, the arrangements are fairly weak. They adhere too much to the original to the extent the tracks themselves just sound like remastered versions of their originals.

There are a few tracks that I can say I really enjoy. "Dr. Wily 1 mix" is a really difficult track to mess up. The original material is highly regarded as the best Rockman composition ever written. The arrangement features a pretty nice guitar solo and offers some nice synth sound effects to highlight the original material a bit. "Metalman mix" is probably my favorite on this album. Sure, it isn't fancy, but the combination of guitar and electronica really helps add a bit of depth to the overall arrangement. "Cutman mix" offers a nice arrangement as well, but it's really simple. The rock definitely does suit this piece a lot though.

As for the rest of the tracks, there's not much good I can say about them. They are pretty much standard transcriptions, like the others, but not as catchy as the three listed above. Granted, there are some nifty guitar solos thrown in here and there, but guitar solos aren't everything. There are also short versions of the original tracks for comparison. I'd give a fairly honourable mention to the concluding track, "Boss Mix Medley". The rock arrangement of the six boss themes from across the series is really fitting here, despite the arrangements being almost straight transcriptions. I especially like how it opens in the Rockman 1 section.

In the end, this album shows that Tohru Iwao should stick with playing what is written for him, and not arrange for himself. Most of the arrangements are pretty simple and sound like remastered original versions. Aside from a few enjoyable arrangements, this album isn't really too great. I recommend it for those who just enjoy Rockman / Mega Man music and would like to hear remastered versions. As for those familiar with doujin rock arrangements, you are better of sticking with those. There is very little to see here. It's a shame really. This had so much potential, but wasn't properly tapped.