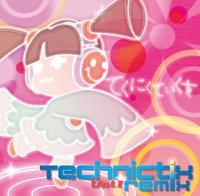 Technictix Remix Vol. 1 is the first of a set of three arranged albums dedicated to the Technictix soundtrack, composed by SuperSweep and pals. This arrange album contains arrangements from SuperSweep members, Shinji Hosoe, Ayako Saso, and Yousuke Yasui, as well as arrangements from guest composers, Hiroto Saito, Takayuki Aihara, and Yasuhisa Watanabe.

To start off the review, I'll mention Hiroto Saito's two contributions, "Earth Electro Will," an arrangement of "Earth Will," and "Echoes of Diamond troll," an arrangement of "Diamond Troll". The former combines a nice futuristic synthscape with a more earthly chanting section. There are also some subtle jazz influences, but for the most part, there is this almost tribal sound to the entire piece. The nice fusion of elements makes for a very entertaining listen. "Echoes of Diamond troll" is probably my favorite out of the two Saitoh contributions. It combines the choral work found in the original with some nice Asian soundscapes, attributed to the fantastic shamisen line and the flittering woodwind work. As the piece progresses, it takes on a more futuristic sound, managing to create something akin to what I'd imagine a futuristic feudal Japan to sound like.

Yasuhisa Watanabe, also known as Yack, contributes a single arrangement to this album. "Mao's Honeymoon," an arrangement of "Mao's Travel," is a nice jazzy synth arrangement. The melody, played by what almost sounds like an accordion, combines nicely with the crystalline synth samples heard throughout the piece. Overall, it's a relaxing and magical arrangement, due to its subdued tone, and makes for a great listen. Another contributor who only has one arrangement on this album is Takayuki Aihara. In my opinion, his arrangement of "Dynamite Egoist," entitled "Dynamite Reloaded," is easily the best thing this album has to offer. Offering such a diverse array of influences, this arrangement manages to entertain during its entire duration, the second longest on the album. At times you'll hear some club like synth, while at others you'll hear some interesting keyboard work. The vocal accents thrown in every once in a while give it a nice funky feel, and at times, the bass is almost too catchy. He also manages to throw in a nice electric guitar solo in there as well as some Spanish influences.

Yousuke Yasui contributes two arrangements to the album. His first, "Inside One, Deep," is an arrangement of "Inside One". Clocking in as the longest arrangement on the album, it features a driving techno beat throughout its duration. The melody line is a bit obscured in this arrangement, making it one that might be tough to listen to in entirety. There are some nice spacey effects and there is variation throughout the piece, but the length and the nearly unchanging bass line makes this the weakest contribution on the album. Fortunately, Yasui's other arrangement, "Cell Phone Boom," an arrangement of "Phone Dead Room," is one of the best things on the album. Yasui manages to take the already awesome "Phone Dead Room," and escalate it a bit. The synth is extremely catchy and as before, the inclusion of the phone effects, in particular the dialing tones that fit the melody, make this another unique offering. For those who might be put off by the phone effects, most of the piece does not feature them and you'll be able to hear the fantastic synth work unadulterated. I think he was able to redeem himself with this one.

Ayako Saso also contributes two arrangements to this album, "Clip! Clack! Clap!," an arrangement of "Clip Click," and "Right Back At You," an arrangement of "Visited Alone". The first is a nice electrojazz arrangement that manages to combine some interesting piano lines with some equally impressive synth sounds. Throw in some vocal work and some magical string sections and you have a fantastic lounge piece, especially with the beautiful saxophone solo thrown in. "Right Back At You" follows a similar style to her other arrangement. While it is also jazz influenced, she manages to throw in some nice ethnic instrumentation and some exotic chanting. Out of the two arrangements from Saso, this is easily my favorite. The piano and ethnic instrumentation combine marvelously together along with the rhythmic beat. The string sections that are used as accompaniment also lend in creating a nice 70's feel, especially when combined with the vocal work. It's a nice varied piece and another fantastic experience.

Last, but not least, is Shinji Hosoe with three arrangements of his own, namely "Vintage Nova," an arrangement of "Bossa Antique," "Cycle of Rebirth," an arrangement of "Spiral Life," and "Noom ad Neetor," an arrangement of "Roteen da Moon". The first, "Vintage Nova," is a relaxing electrojazz arrangement. The jazzy rhythm manages to keep the jazzy feel while the spacey synth helps to give it a nice futuristic vibe. "Cycle of Rebirth," is easily another fantastic arrangement on this already fantastic album. It has a very futuristic vibe that features some nice mixing of electronica elements. The melody takes a while to pick up, but the overall atmosphere is worth absorbing as you get to it. It's one of those pieces that could make it into a game like R-Type. Saving the craziest for last, "Noom ad Neetor," is just pure adrenaline and possibly seizure-inducing. It is an intense arrangement of the original, featuring driving industrial beats and some exotic female vocal work. There is just so much intensity in this piece that it really energizes you to want to do something. The best part, though, is the scat vocal work that is also thrown in there. It is ultimately the second best thing this album has to offer, in my opinion.

Technictix Remix Vol. 1 is an interesting blend of elements. While the album seems to have a more jazz like influence throughout it, each arrangement manages to offer something unique to the table, whether it be the combination of earthly and spacey soundscapes, or the driving rhythm of a caffeine-induced rave party. In the end, I think every arranger did a fantastic job overall. This album came out in August of 2008 and I'm still listening to it. That has to mean something, right?

TRACK 08 Inside one, deep (Original: Inside one)
Composed by Ayako Saso / Arranged by Yousuke Yasui